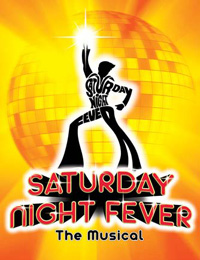 Put your Boogie Shoes On! Get ready to tap your toe along with the songs during the matinee show at Circa 21 Dinner Playhouse!

Tony Manero doesn’t have much going for him during the week days. He still lives at home and works as a paint store clerk in his Brooklyn neighborhood. But he lives for the weekends when he and his friends go to the local disco and dance the night away. When a big dance competition is announced, he wrangles the beautiful and talented Stephanie to be his partner. As the two train for the big night, they start to fall for each other as well.

Based on the 1977 movie phenomenon that launched the disco era and made John Travolta a household name, Saturday Night Fever features songs from the Bee Gees and is one of the most successful movie sound tracks of all time. The stage musical includes almost all of the songs from the original movie sound track, bringing us back to the time when disco was king. If you get “Boogie Fever” and feel like “You Should Be Dancin’,” this is the show for you!

Join JH Travel for a fun afternoon away to enjoy this musical dinner show!